in 40 years as a statistician exploring most humanly purposeful (and pro- next generation) organisations and networks in the world, BRAC gets my vote as number 1,  SO hel wanted

please help us update or fill in 100 links every job-creating and poverty-ending millennial might enjoy knowing exist -chris.macrae@yahoo.co.uk washington dc 301 881 1655 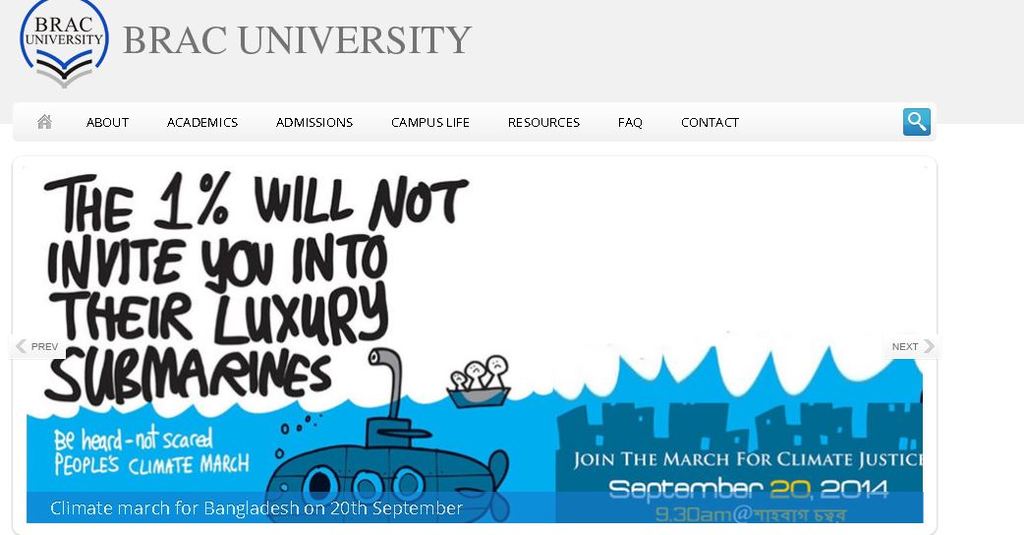 Crowdmapping the world we want A crowdmap of votes in BRAC’s informal, unscientific poll of its community network’s priorities for development after 2015.

Crowdmapping is an undeniably cool tool in development. It’s amazing that we now can take data from people scattered all over the place, who don’t know each other, and easily consolidate it into a central, often beautiful and transparent website.

BRAC often uses crowdmapping, but traditionally it’s the old-school, low-tech style. We sit with community members to draw out important details of a neighborhood: gathering points, extremely poor households, toilets, etc. Often the first draft is drawn in the dirt, and then converted to hard paper form.

This dialogue of collaborative map making has important social effects that enable BRAC, its volunteers, and community groups to gain support and work more effectively.

But what if we could leverage this very solid network of grassroots’ presence for quick, informal polls?

That question confronted us in the middle of a discussion on what the world’s development agenda should be after 2015, post-Millennium Development Goals. We decided to do an experiment—to leverage our community forums to run a non-scientific, nationwide poll.

The open-source, crowdmapping platform, Ushahidi, advertises that it can be set up within minutes. While it took us a little longer, within a week we were prepared to receive responses via SMS and automatically catalogue them by district of origin and vote.

Local BRAC staff members, the program organizers who are always present during these meetings, conducted the poll, spending a few minutes at the end of the meeting to read the question, possible responses, and count the votes. For each meeting, we received just one vote, representing the most popular response. The results immediately came up on the crowd map.

I was on a field visit in Narsingdi the first day that the polls were open. After a full day of visits and meetings, I came back to the regional office, where I promptly opened my laptop to look at the map, and see if there was any activity. Indeed, over 200 votes had already been posted. I thought that was a lot! Little did I know it was just getting started. By the end of the week, we had reached 2,600 votes. A week later, when we closed the poll, we were close to 12,000 votes, conservatively representing over 175,000 participants.

The results are interesting. In each of Bangladesh’s six divisions, education was the top priority, receiving 36 percent of all votes. Health, sanitation, and electricity were tied, each with about 15 percent of votes. Together, these four categories represent about 80 percent of all votes. While there are significant methodological limitations, the emergence of education as a top community priority is supported by other community consultations, such as the UN’s recently published “my world” report, another attempt to making the priority-setting process more inclusive.

Most exciting from my standpoint is that we now have a “new,” easy-to-implement tool of grassroots polling by SMS. Our frontline staff demonstrated that they can execute surveys of this kind. How else can we use this tool to map grassroots ideas, preferences, or events nationally?

It didn’t take long for a second use case to emerge. For the events held on Valentine’s Day (February 14th), BRAC staff and clients participated in the “One Billion Rising” activities, mobilizing people across several countries to demand an end to violence against women. In Bangladesh, we asked staff to count and SMS the number of people who participated in the local events. In each of the 64 districts, our district BRAC representative (DBR) sent an SMS will the total number of participants for his or her district. These went directly to a crowdmap. Within hours, we had calculated that an approximate 2.6 million people had been mobilized in BRAC’s activities across Bangladesh.

What’s the next opportunity to apply this application? I’m not sure, but I’m excited to find out.

What other frugal and powerful tools are out there that we haven’t discovered? If you think you have one, apply to join us at the first Frugal Innovation Forum organized by BRAC’s Social Innovation Lab. The event will take place March 30-31 in Savar, Bangladesh. Don’t wait to apply; the deadline is this Thursday, February 21! We live in an innovation obsessed world. Organisations across sectors have made innovating an explicit priority. Many are devising deliberate strategies to foster innovation. In 2012, BRAC, the world’s largest NGO, developed the Social Innovation Lab for this purpose. We step out from the researcher’s cubicle and explore innovations happening on the frontlines. As we try to determine what works and what doesn’t, and why and how, we often come across innovators who are doing extraordinary work; yet, they are relatively unknown. This map is an effort to put innovators across South Asia on a simple, open platform.

The idea that organisations can improve their work by interacting with their peers is at the heart of the Social Innovation Lab’s “Doing while learning” initiative. The project aims to encourage dialogue amongst South Asian innovators with the goal of creating a better understanding of how social innovations scale and to map the South Asian innovation ecosystem.

Our first task was figuring out who the existing innovators are. Some of them we could find by searching the web and others we found on trips through India and Bangladesh (we hope to visit Pakistan soon to increase our connections there).  There are many innovative organisations, but it was difficult to find one comprehensive list. We’ve developed this map to ignite a global discussion regarding low-cost, high impact innovation, or what we like to call frugal innovation.

At our Frugal Innovation Forum, in late March, we asked organisations to share the names of their innovative South Asian colleagues. Their insights are the key input of this map. From BRAC’s 41 years of experience in this region, we know that social innovations are not new to South Asia. However many of them aren’t on the web, and that makes them invisible to the global North.

The international development sector is often perceived as less innovative. The reality is that a scarcity of resources has pushed the development sector of South Asia to a point where innovation is not a buzzword, it is essential.

We know that scaling innovations continues to challenge many innovators. However, partnerships can be a great way to increase an organisation’s impact. If you are looking for innovative partners, you should take a look at this map.

When we think about innovation, we tend to think of fancy gadgets, but many of these organisations based their model on a low-tech idea. The map includes Dnet, in Bangladesh, which trains and funds female entrepreneurs in rural areas. A young woman riding on her bicycle and carrying a laptop to provide internet-based services in the rural areas is no longer a shocking scene in Bangladesh. They are known as Infoladies, an interesting example of empowering women and village communities.

If you want to see a game-changing innovation, consider the example of Goonj. It has made clothing accessible to some of India’s poorest by creating a way for middle class Indians to donate their used clothing.

Increasingly, there is recognition of the importance of a facilitating ecosystem, or the “Silicon Valley effect”. Innovators need inspiration, support, and collaborators. That’s why Aavishkaar provides venture capital financing and management support to socially conscious, environmentally friendly, and commercially viable ventures in rural areas – those without access to established financial institutions. By covering the last mile, it is demonstrating the power of venture capital and its ability to transform rural innovations into viable microenterprises.

This map is just a starting point – we hope it is a platform for connecting and making the richness of the South Asian ecosystems for social innovation more apparent and accessible. If you are interested in learning more about South Asian innovators, check out the map and add innovative South Asian organisations that you know about. You can also post your comments and raise the “credibility” of each organisation. We encourage you to explore the many social innovations across South Asia!

Anjali Sarker is the Bangladesh focal point for Ashoka and a consultant to the BRAC Social Innovation Lab. @anjalisarker

7 ways BRAC will innovate with mobile money this year

We are excited to officially announce the winners of the innovation fund for mobile money challenge! These projects were selected from the 100 ideas that were submitted on the innovation fund challenge web site, reviewed by external advisors, and finally decided on by an internal judging panel. These projects will be implemented over the course of the next year by BRAC in Bangladesh—so stay tuned for many more updates!

All of the authors work with the BRAC social innovation lab. 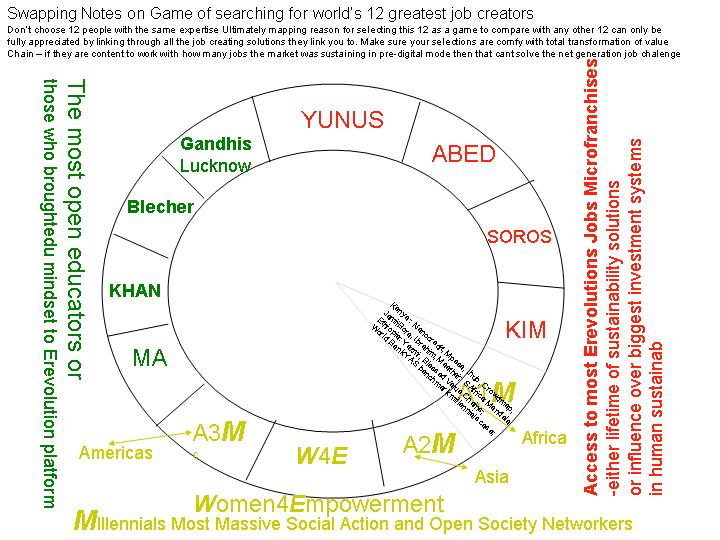 101ways-generation.docx 101 ways education can save the world WHAT IF WE DESIGNED LIFELONG LIVELIHOOD LOEARNING SO THAT so that teachers & students, parent & communities were empowered to be ahead of 100 times more tech rather than the remnants of a system that puts macihnes and their exhausts ahead of human life and nature's renewal 2016 is arguably the first time thet educatirs became front and centre to the question that Von neummn asked journalist to mediate back in 1951- what goods will peoples do with 100 times more tech per decade? It appears that while multilaterals like the Un got used in soundbite and twittering ages to claim they valued rifghts & inclusion, pubblic goods & safety, they fotgot theirUN tech twin in Genva has been practising global connectivity since 1865, that dellow Goats of V neumnn has chiared Intellectual Cooperation in the 1920s which pervesrely became the quasi trade union Unesco- it took Abedian inspired educations in 2016 ro reunite ed and tecah as well as health and trade ; 7 decades of the UN not valuing Numenn's question at its core is quite late, but if we dare graviate UN2 aeound this digital coperation question now we give the younger half if the world a chnace especially as a billion poorest women have been synchronised to deep community human development since 1970