how to build health, education, banking services from nothing

starting with no infrastructure and no money and endemic illiteracy and disease, how did BRAC villager networks around Sir Fazle ABED

Bangladesh was born the world's poorest new 100 million plus nation in 1971. Villagers were the majority of the populace and their communities had none of the essential life shaping services (no infrastructure such as electricity, running water, communications from roads to telecoms) Can you help us adapt the world record job creators game - from overall to 12 greatest job creators by health, education ...

Out of India: the story of Babai Sathe who transformed from being an untouchable illiterate into childhood  into a trusted village doctor of maternal and infant health also mirrors the health service that BRAC built from 1972 , which was soon to be linked into building education, banking and agricultural markets so that the poorest village families in the world could network to end poverty. http://www.jamkhed.org/

BRAC's first massive villager network was able to scale  50000 village para-health networkers due to the need to combat the tragedy of one in 5 infants dying of diarrhea. Fortunately, oral rehydration a cure in the form of educating mothers to mix boiled water , sugar and salts in the right proportions had been discovered. So BRAC sought donor funds for this training to be taken to every vilage. In the process it was discovered that there was a permanent need and sustainable small business for those willing to serve the communities most other basic illnesses in ways that BRAC could coordinate the training network around. In effect the modern world's first microlending network emerged because of the need to provide the training and seed funds to replicate the mkicrofranchsie of para health worker across 50000 village locations

Over the years BRAC has become a world knowledge linking centre for most effective ways of serving all major diseases specific to raising life expectancies in rural areas. Its university also hosts the annual world class curriculum of James Grant School of Medicine 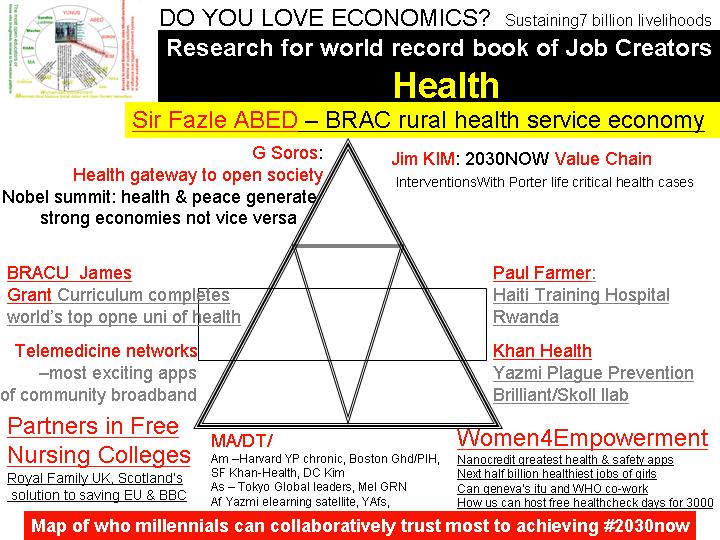 Health has always been pivotal to Soros and Gorbachev's aim of valuing open society everywhere especially out of their renewed nations : Russia and its West. Gorbachev also co-founded Nobel Peace laureate summits wishing for youth to value how peace and health generate strong economies not vice versa.

Both have helped build rural health from scratch (Abed Bangladesh: Farmer Haiti and the new Rwanda); oral rehydration community service networkers being a foundation movement as both linked in infant and maternal care as a start; both are valued by Soros the current world's most daring advocate of open society needing to rethink economics from the bottom-up ( as well as in his youth one of those to profit most from governments pretending they can rule over currencies)

Both BRAC and PIH have reputations second to none as delivering to funding partners. However both confide that while funder satisfactuon is absolutely critical, connecting every project to leave behind empowerment capacity in the village is the extra creative focus they spend night and day designing into service and learning networks.

Unlike Sir Fazle Abed, Paul Farmer's day job is at Boston's Brigham Womens Hospital, and he co-founded Partners in Health with Jim Kim (now desperate to see a new world bank that millennial so can trust- starting with getting his friend michael porter to help remap every health care value chain that is spinning away from sustaining accessibility to affordable health for all) With Berners Lee also in Boston, its unique;y energised by open tech resources and with as highly educated/connected milennials concerned for the future of medicine humanity needs most

Unlike Paul Farmer, Sir Fazle launched a university - probably no practice area has as flagship faculty as the James Grant School of Public Health curriculum. In less than 2 years, Sal Khan has made his academy the most viewed health resource in elearning - Khan values searches for peer to peer teachers of health's most actionable 7 minute learning modules second only to mathematics as an urgent curriculum to link worldwide youth. Everywhere that open experiments in community broadband are sustained, telemedicine appears as number 1 living app. This focal opportunity mirrors first experiments women villagers made with mobile phones in bangladesh 1996. Today Women4Empowerment searches the world for ways to connect those with greatest tech resources with grassroots networkers in most desperate need of community health services (valuing Sir Fazle's 3 classical E's of Effective, Efficient, Expandable)

How did BRAC develop the world's most productive primary school system out of the Bangladeshi villages. Scaling 40000 schools?! At least 3 vocational inspirations are evident:

How did bank design the most effective microfinance and banking systems

The vast majority of microfinance loans made by BRAC Bangladesh were to villagers who took up microfranchises which BRAC had designed into its transformation of (while market ) value chains so that every job in the value chain offered a decent livelihood.

It is notable that before BRAC introduced microfinance it was already deeply embedded  with village service networks of health services and education.

BRAC Bangladesh has a unique sense of timing opportunities to transform markets around poverty alleviation . Note how it chose optimal moments in the post-mobile development of Bangladesh to develop BRAC bank and cashless banking ( www.bkash.com ). Note how BRAC values learning with the world's most relevant partners: 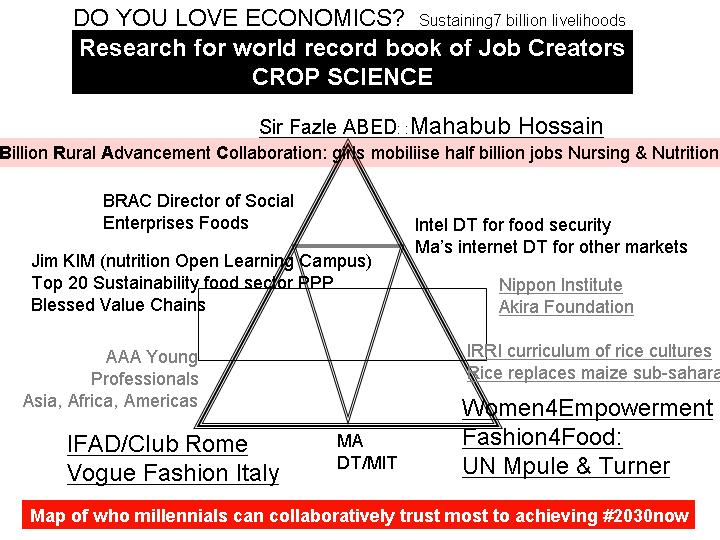 2 a market's value chain is dominated by organisations that do not care about sustainability of  livelihoods ( of poorest, or in some cases which forms of globalisation have worsened of anyone with skills relevant to the sector)

3 It shouldnt surprise us that brac crop science experts haver over the years attracted those with the most knowhow for adapting the crop to sustainable livelehoods. So with rice being the most vital of all crops , no surprise that Mahabub Hossain is trusted by peer experts as a world knowhow leader

When small rural producers in foods markets are trapped in poverty, BRAC's solution was to redesign the whole value chain, It did this for poultry and dairy- and many vegetable crops.  In many cases this meant becoming a leader of the whole market chain which it redesigned around maximum sustainability of livelihoods matched serving end customer needs. In other words it minimised the costs of middle men and ensured that producers had an affordable market channel (one that BRAC owned not to profiteer each cycle but to sustain the sorts of jobs that can end poverty)

Typically BRAC's social enterprises are cases of leading a whole value chain. The director of social enterprises is not only a critical strategic job but must resonate with the DNA of the whole of BRAC branding. For example, some areas of Bangladesh's nationwide chilling stations connecting its milk market cant make a profit even though the individual workers are working as hard as those in other areas. BRAC is prepared to use a model which cross-subisidises areas because the goal is not profit maximisasatuin but job sustainability maximisation.

Furthermore Kim's life experience in health enables him unlike any previous world bank leader to gain 100% awareness of facts like the first 1000 days of infant nutrition are critical not just to health but whether the brain develops fully. When you look back at history's greatest famines- its seldom that there hasnt been enoigh food somewhere in the region, it has been first and foremost a local distribution (including infrastructure and so political)  problem. Until the obama administration, food security and value chains were not common parlance in washington DC (at least since 1996 since which time I have reported out of DC more than any other capital).

If obama has only has one successful legacy, foreign assistance on food security is probably what the world would most like to cheer USA for. Better yet if USA and China could agree on one thing that its a complete win-win , maybe its mobilising big data sets on crops to maximise small crop producers livelihood- at least on crops like rice where scale is not a primary advantage. This goes back to my fathers most cheerful chart in the world in his survey on the ascent of china as number 1 nation back in The Economist of 1976!