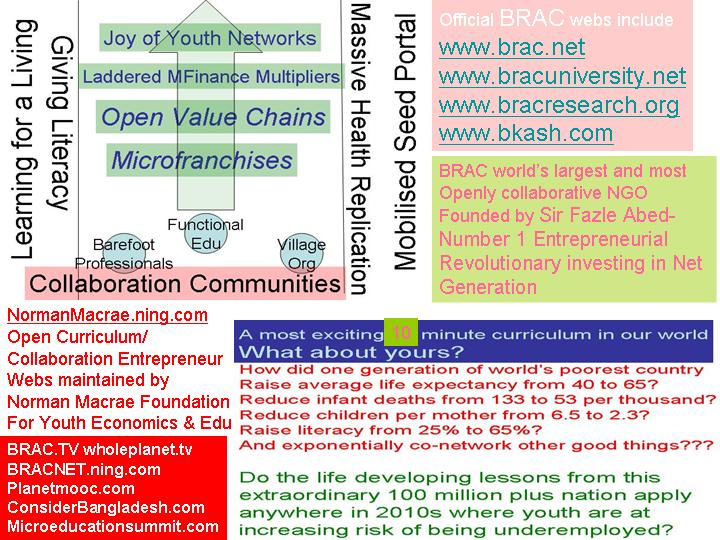 1 Enjoy the most local and extreme trusted relationships with those whose need is at the epicenre of your unique reason for existence. For example if you pursue the integenerational goal of eradicating extreme poverty out of every community then your co-workers need to be locally there in the very poorest communities. Compare this with a worthy international aid program which has to spend part of the funds identifying and earning the trust of the extreme poorest in each far away nation . And whose ability to contribute to intergenerational development is  constrained by how look it is guaranteed to be there.

2 Establish a deepest basis for being the local collaboration partner of international choice. BRAC was born out of one the most disastrous situations ever experienced. About half a million people and infracstucture were wiped out by a local cyclone in 1972. Even famous global relief agencies could'nt get to the region without BRAC's help - so it was born a bottom-up relief agency. But BRAC also seized the opportunity to evolve from relief to development - compare this with some global relief agencies whose fund raising remits actually forbids them to contribute beyond immediacy of "the relief" stage

3 When you partber with international aid, be transparent in achievement of their specified goals but maximise local empowerment of local people in doing this and tranfer of knowhow. BRAC goes further and demonstrtaes through hi-trust research the win-win between the global good intent and the local empowermemt.  This is one of the values of its own research division www.bracresearch.net  BRAC's founder Sir Fazle Abed discovered that the Brazilian Paulo Freire offered breakthrough processes in empowering the poorest to take charge. When BRAC started literacy and empowerment programs (including up to 100 modules based on Friere) were core in helping refugees who had started the 1970s by losing everything including confidence in self either in the war of independence or in natural disaster.

4 Also part of the research process in developing goal-solutions is the expectation that there will need to be several small scale trials to design effectiveness; then you work on the second e of efficiency; and then the 3rd e of expansion (scaling). This triple-e  order of new product development is a basic truism in markets of the commercial world but its sad wgerever these innovation execution basics are not  understood in parts of the NGO world.

5 Learning about the entrepreneurial revolution of microfranchise solutions  is simplest if you study BRAC's  cases first.   Map how these suppport win-win clusters around key micro-up knowhow and networking structures. Characteristocs 6 and 7 review whether a microfranchise cluster is interdependent with a job creating village banking structure (sometimes called BRAC's microfinance plus plus)

6 What BRAC designs into  its microfinance models (that cumulatively serve over 8 milion village members in Bangaldesh)  is a local group formed  typically around 45 village mothers . At each week's meeting circle,  their local savings and credit needs are served by a brac vilage bank manager. Moreover the group's composition has been chosen so that to start up there is a balance of trades within the group - ie not excess supply of one need and lack of another. However through time BRAC analyses how to help different producers with productivity/quality that can extend the market beyond the group. With almost every kind of common crop and farm anima.l BRAC  R&D has innovated output by sevral fold. Once BRAC knows how to empower villagers do this, it also takes charge of the whole sectors value chain so that the vilage producesr get a good market price for their sales beyond the group. In other words as long as brac microentrepreneur is a hard worker, the market risk is minimised by the way BRAC designs value chains integrating the smallest or poorest producers. This is all part of the bank's role in sustaining jobs and peoples and community devlopment through time

7 Example of brac that isnt directly connected to micrifinance are its schools now totaling over 40000 in Bangaldesh. This nation's constitution claims every child has a right to free primary education. But this did not mean that the new nation of Bangladesh in 1970s could afford this in all rural areas either in terms of the government providing the service or the families sending (especially girls) to school. BRAC's schools are a case of designing the most effective and efficient one room rural schools - helping government fill a gap it didnt have resources or locally skilled teachers to fill, in combination with international aid partners who care about child development as a basic human right

8 When opportunities come along to add to sustainability of a program (especially those still aid dependent for funding) brac is quite happy to invest in owning businesses whose profits are ploughed back into the overall BRAC NGO trust. An early examples was publishing school textbooks.

9 When technology changes ,its absolutely vital that a bootom-up NGO gets out there in the sectir to retain leadership of the value chain for pro-poor integration. So as information technology came to rural banglades,h BRAC opened up a nationwide banking system. This left its village banks largely unchanged , but helped BRAC sustain its value chain leadership or markets whose contonuing purpose it wanted designed round inclusion of the poorest.  Today BRAC is also the benchmark for the global banks with values network - ie banks that care about investing in their customers productivity never in trapping them in debt

10 If you searching through BRAC partners, today they embrace almost any sector that could be relevant to eradicating poverty and they linkin the world's best open technology wizards from MIT and elsewhere. This also put BRAC in a good position to be the most collaborative force in open education by empowerng the net generation to achieve the most human goals that coilaboration technology empowering worldwide youth can design and loccally link in. longer view of where next:

10 characteristics of bottom-up ngo .where next?

appraising the curriculum correspondence of progress made by Bangladesh at 40 and the 2015 millennium goals
1.1 Differences and similarities between Bangladesh's networks: BRAC & Grameen
1.1a Examples of nations where Bangla Bottom-Up has been wholly & truly implemented
1.1b Reconsidering Norman Macrae's Pro-Youth Economics “Consider" Trilogy (Consider Japan from 62; Consider China from 76; Consider Bangladesh from 2001 in contexts such as :1 Asia pacific www century (The Economist 1975); searching for 30000 microfranchises to create netgen’s 3 billion jobs – 1984 book; 3 collaboration generation millennium goals and prevention of greatest risks (ending poverty)
1.2 Bottom-Up Open Franchise E1-2-3 : Effective > Efficient> Expandable (is scalable)
1.3 More on the pro-youth economic methods " microfranchise &
1C2 to IC7Apps linking 1 & 2 through 7..- noting gamechangers and pro-youth 2010s timelines
2 Value multipliers: Massive Open Online Collaboration/Course/Curriculum what should and should not be examined
Which MOOCs will scale and maximise the human possibilities of the ... – why are collaboration treasure maps configured around 9 minute audio training modules millions of youth most need to interact
can we map how MOOCING free university will make even man's moon ra... linking pro-youth stakeholder segments who wish to end the 4 education monopolies of what's researched, what's taught.. what's examined, who accredits?  ..

survey of which online educators value youth's futures most

how to design education to destroy the net generation or

Choice of 2 worst ways to be mass mediated- can we help youth end t...

Help us Update The Economist's Curriculum of Entrepreneurial Revolu...

comments on what is the mooc class of2013

Map of Universities with a future for Youth

What open society curricula would you like your children to be free...

curriculum of the 7 quarters of The Economist   ...

Entrepreneur - Lost transcripts from 170 years of diaries at The Ec...

what would you add to social business channel at youtube

MOOCYunus agenda for may 12 first semi-annual review with Dr Yunus ...

Key words of Entrepreurial Revolution genre started at the Economis...

These 3 slides condense 12 years of work by The Economist's pro-youth economist  (aka dad of chris.macrae@yahoo.co.uk

mooctwitter - can you help me with a 10 minute curriculum on how ou...

12 minutes on what everyone needs to know first about marketing if ...

Updating The Economist's 1984 curriculum - why people need to prepa...

Map of what youth can do if they live in a nation where business mo...